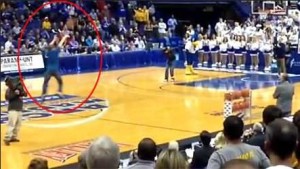 When Alex Permann made a half-court shot before the Missouri Valley Conference championship basketball game, he thought he had won $50,000. The contest required that he make a layup, free throw, three-pointer and half-court shot in 24 seconds in order to win the prize. However, he forgot about the three-point shot. By the time he realized his mistake, he had time to get off a couple of hurried attempts from three-point range, but he misfired, thus losing out on the grand prize.

A lot of people live in fear of missing out on heaven because they didn’t do enough. They are afraid that they have omitted something, and that God will deny them the ultimate prize because of their short-coming. Have they been as generous as they should have been? Have they forgiven everyone who has wronged them? Have they missed an opportunity to serve? Have they disobeyed God in some unknown way?

While it is important to be concerned about these matters, the answers to those questions will not determine where we spend eternity.

Whether or not we have accepted the grace that God has offered us through his son Jesus Christ will determine our salvation.

“Therefore, there is now no condemnation for those who are in Christ Jesus.”—Romans 8:1.