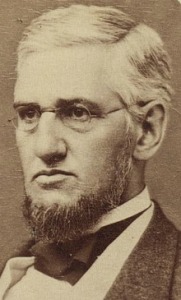 Horatio Gates Spafford planned a European vacation for his family in 1873. Some business developments prevented him from leaving as scheduled, but he sent his wife and two daughters on without him. He would leave a few days later and meet them there.

On November 22, their ship was struck by an English vessel and it sank. Mrs. Spafford survived, but her daughters, along with 226 others, perished. When Mrs. Spafford landed on shore, she cabled her husband, “Saved alone.”

A few days later, Spafford sailed for Europe to be with his grief-stricken wife. One can only imagine the heartbreak and loneliness he felt on the voyage. The captain showed him the place where the shipwreck that took his daughters’ lives had occurred.

Spafford returned to his cabin that night, where he spent much time in prayer. Feeling the comfort that only God can give, he wrote of his experience:

Whatever my lot, thou hast taught me to say,

When you have Jesus in your life you know that all is well—no matter what happens!

“And the peace of God, which transcends all understanding, will guard your hearts and your minds in Christ Jesus.”—Philippians 4:7.

This entry was posted in Christian Living, Communion Meditations, Prayer and tagged coping with sorrow, Horatio Gates Spafford, illustration, It Is Well, peace, peace like a river, peace of God, Philippians 4:7. Bookmark the permalink.

2 Responses to It Is Well