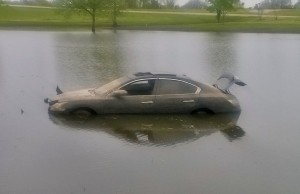 Earlier this year I noticed a car that appeared to be stuck in the mud. Apparently, the driver had tried to get close to a pond, perhaps to do some fishing. The pond was located in a field close to a river. The spring rains had made the ground so soft that the driver was forced to leave his car and head home on foot. I remember hoping that he would be able to get his car moved soon.

A few weeks later I drove by that scene again. This time the rains had increased, and the water from the river had backed up, completely covering the field where the car had been stranded. I remembered the car, and thought how bad it would be for the owner if he had not removed his vehicle.

Some time after that, I once again drove by that place. By now the water had receded, and I saw that the car had never been moved! It had been completely submerged by the spring flooding. I don’t know if the car was worth much to begin with, but its value had certainly diminished now, all because the owner parked it in a dangerous place.

The Bible warns us that there are some places that are dangerous for us. One of those places is in the company of those who would lead us astray. 1 Corinthians 15:33 says, “Do not be misled: “Bad company corrupts good character.”

Someone once said, “Show me your friends and I’ll show you your future.”

You aren’t parked in a dangerous place, are you?

1 Response to Bad Place to Park