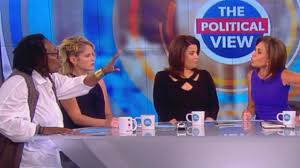 Some of my conservative friends have suggested that The View should not be on television because of their radical left-wing opinions and the mean-spirited way that they make these opinions known. I respectfully disagree. I think that people have a right to express their opinions, even if they differ very much from my own views. Furthermore, I think that when mean and ignorant people are allowed to speak freely, they unwittingly point most people toward the truth.

As if to make my point, Whoopi Goldberg, one of the hosts of The View, recently had a spirited on-air debate with a conservative guest on the show, Judge Jeanine Pirro. Whoopi insisted to Pirro that she (Whoopi) did not have “Trump Derangement Syndrome”, a condition that causes people who hate President Trump to lose their ability to think and speak rationally. Whoopi got so worked up that she appeared to be… well…deranged!

So, let people talk. It only helps rational people discern the truth.

“The mocker seeks wisdom and finds none, but knowledge comes easily to the discerning.”—Proverbs 14:6.

2 Responses to My View