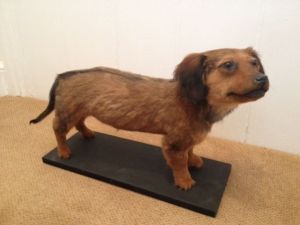 In Never Have Your Dog Stuffed, Alan Alda talks about how he had a beloved pet dog when he was eight years old. When the dog died, Alda was so sad about burying it that his father decided to have the dog stuffed instead.

“We kept it on the porch and deliverymen were afraid to make deliveries,” Alda recalled in an interview with Newsweek. He then continued, “There are a lot of ways we stuff the dog, trying to avoid change, hanging on to a moment that’s passed.”

Churches seem to have a special affinity for “stuffing the dog”–maintaining programs, buildings, etc. in an attempt to forestall necessary change. In the short term, it’s sometimes much easier to stuff a church’s pets than to acknowledge their death, grieve their loss, and give them an appropriate burial.

Have you ever tried to “stuff the dog”?

“He who was seated on the throne said, ‘I am making everything new!’…”—Revelation 21:5.

This entry was posted in Christian Living, Church, Leadership and tagged Alan Alda, change, I am making everything new, illustration, Never Have Your Dog Stuffed, Revelation 21:5, taxidermy for pets. Bookmark the permalink.