Who Are You Going to Believe? 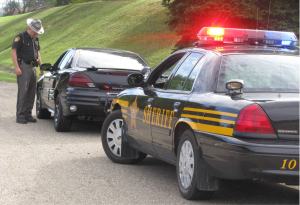 A man was speeding through a small town when he got pulled over by a local deputy. The deputy approached the car and said, “I guess you know you were driving well over the speed limit. Let me see your driver’s license, sir.”

“Oh, I don’t have a driver’s license,” the man replied.

“What?! You don’t have a license? Such disrespect for the law! Well, show me your proof of insurance.”

“Sir, I don’t have any insurance,” the driver answered.

“You mean to tell me that you don’t have either a driver’s license or insurance on this vehicle? You are going to be in a lot of trouble!”

“Sir, you need to just calm down,” the driver exhorted. “If you are going to be that upset about those little things, what are you going to do when I show you the dead body in the trunk of my car?”

Upon hearing that, the deputy called for backup. In just a couple of minutes the sheriff pulled up with his blue light flashing. After a brief consultation with the deputy, the sheriff spoke to the driver.

“My deputy here says that you were driving through our town without a license.”

“That’s not true, sheriff! I have a valid driver’s license. Here, take a look.”

“So you do,” said the sheriff. “Well, I hear that you don’t have any insurance on this automobile.”

“Of course I have insurance,” the man answered. Reaching into the glove box, he pulled out his insurance information and said, “See here! My insurance is paid up! Here’s the proof!”

“OK, but what is this I hear about a dead body in the trunk of your car?”

“Dead body!? What are you talking about?” The driver opened up the trunk and showed the sheriff that there was nothing there except a spare tire.

Sometimes we don’t know who to believe. But we can always trust Jesus to tell us the truth.

“Jesus answered, ‘I am the way and the truth and the life. No one comes to the Father except through me.’”—John 14:6

This entry was posted in Christian Living, Communion Meditations, Humor and tagged I am the way and the truth and the life, illustration, John 14:6, obeying the law, sheriff's car, traffic stop, truth. Bookmark the permalink.