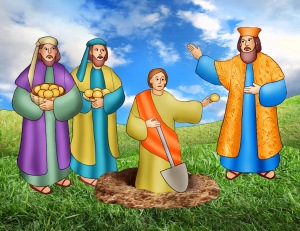 In Matthew 25:14-30, Jesus tells a parable about three servants who were entrusted with a sum of money to be invested for him. After a period of time, the master held the servants accountable for their actions. The first two showed a return for their investment, and they were praised and rewarded by the master. The third servant, however, failed to gain anything for the master. He hid the money that was entrusted to him and gave it back to him without any gain whatsoever. This servant was harshly criticized and severely punished.

John MacArthur says, “The third servant…put aside what God had given him and went about his own selfish business. He called himself a servant of God but demonstrated conclusively he was not…The failure of the third servant to use that with which he had been entrusted by his master represents the emptiness, uselessness, and worthlessness of a life in which profession of faith in Christ is proved false and meaningless by the careless waste of privilege and opportunity.”

Like the three servants in the parable, we all will be held accountable for our decisions about being faithful in our service to Jesus. Let’s make sure that he finds us faithful!

“His master replied, ‘Well done, good and faithful servant! You have been faithful with a few things; I will put you in charge of many things. Come and share your master’s happiness!’”—Matthew 25:21