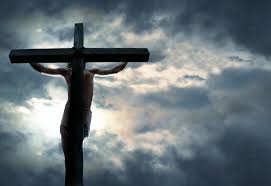 In The Wizard of Oz, when the house landed on the wicked witch of the East, the coroner was called to the scene. After examining the body, he famously proclaimed, “She’s not only merely dead, she’s really most sincerely dead!”

When Jesus died on the cross to pay for our sins, he was really dead. He did not merely swoon on the cross, only to regain consciousness in the coolness of the tomb, as some liberal scholars have claimed. A Roman soldier thrust his spear into Jesus’ side to confirm that he was indeed dead (John 19:34).

The innocent Son of God willingly laid down his life to pay for the sins of the world. He really and truly died for us.

This entry was posted in Christian Living, Communion Meditations and tagged Christ died for us, God's love for us, illustration, John 19:34, Romans 5:6-8, spear into Jesus' side, The Wizard of Oz, wicked witch. Bookmark the permalink.