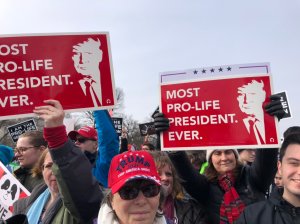 President Donald Trump attended the March for Life rally on the National Mall in Washington last Friday. He was the first president to join the annual pro-life event. President Trump has addressed the group via satellite the past two years, but this year he showed up in person and spoke to the huge throng of people who gathered to show their respect for human life.

Trump’s appearance thrilled Jeanne Mancini, the president of the March for Life, who said, “We are so excited for him to experience in person how passionate our marchers are about life and protecting the unborn.”

Let’s hope that more and more people develop such a passion for life, and that future presidents will also speak up on behalf of those who are unable to speak for themselves.

“For you created my inmost being; you knit me together in my mother’s womb.”—Psalm 139:13.