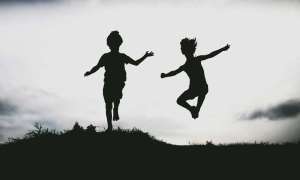 Years ago I worked with teenagers for a week each summer at a Christian camp. I remember how much energy the kids had when they were playing games and participating in organized activities. Even in the scorching heat and high humidity, there was no slowing them down. Their competitive nature really came to the surface. They desperately wanted to win any and all competitions, whether as individuals or as a team. I remember one boy slamming into a picnic table while running at full speed! I was sure that he was badly hurt, but he shook it off and continued playing as if nothing had happened.

I also remember the lack of energy that many of them showed when it was time to head to a class or a worship service. These same kids who were flying around in a blur just a little while ago now had barely enough energy to move! They appeared to be wearing shoes made out of concrete, barely able to take one slow, small step after another. It was like they were moving in slow motion.

People tend to do the same thing when they grow older. They have plenty of enthusiasm for sports, hobbies and recreation. However, the energy level for many seems to diminish greatly when it’s time to pray, read the Bible or go to a worship service.

Many people have no time for Bible reading and prayer, but plenty of time for television, movies, video games, and browsing social media. Some have good intentions. They mean to get around to reading the Bible and praying. But their other activities drain them of all their energy, and they fall into bed at night, too exhausted to give the Lord the attention he deserves.

I have a theory about this. I think we have enough time and energy to do the things we really want to do. It’s just a matter of having a heart for it.

“To this end I strenuously contend with all the energy Christ so powerfully works in me.”—Colossians 1:29.