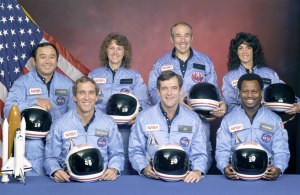 30 years have now passed since the occurrence of one of the greatest tragedies in the history of the United States space program. On January 28, 1986, the space shuttle Challenger blasted off, carrying seven astronauts. Shortly after take-off, the shuttle exploded, killing everyone on board.

The nation mourned the loss of those brave individuals, and we still appreciate their willingness to risk their lives in the hopes of making advances in science that would benefit the whole human race. We remember their sacrifice with great gratitude.

Nearly 2,000 years have passed since another noteworthy sacrifice. Jesus Christ gave his life so that the whole human race would have the opportunity to be saved. Every week, Christians gather to commemorate his sacrifice and to remember that he loves us so much that he would rather die for us than to live in eternity without us.

“…Jesus Christ, the Righteous One. He is the atoning sacrifice for our sins, and not only for ours but also for the sins of the whole world.”—1 John 2:1-2.