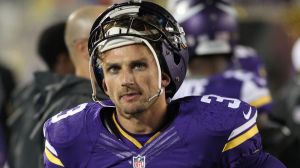 Minnesota Vikings kicker Blair Walsh missed a 27-yard field goal in the last seconds of a playoff game against the Seattle Seahawks on January 10, 2016. Instead of putting his team ahead and almost assuring them of victory, Walsh and his teammates suffered a 10-9 loss that ended their season.

Speaking to reporters the day after the game, Walsh said, “I think it’s important that people understand that, as hard as this is, I’m not a charity case. I’m somebody who’s really confident in my abilities. I know that sounds strange, but I’ll be back next year and I’ll be just as good. I know I will. …It’s football. There’s plenty of things that people are going through, battling cancer and sickness and other things that are real adversity.”

Let’s keep in mind that there are some things that are far more important than sporting events. Let’s keep pressing on, even in the face of real adversity.

”And the God of all grace, who called you to his eternal glory in Christ, after you have suffered a little while, will himself restore you and make you strong, firm and steadfast.”—1 Peter 5:10.