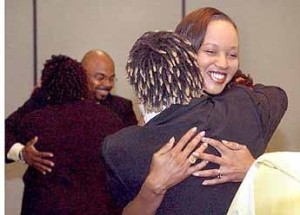 As soon as I saw a certain lady at church last Sunday, I went over and gave her a hug. She was sad because her sister-in-law had just lost a long battle with cancer. A hug was the least I could do to comfort her.

Later, after church had started, I noticed another lady in the congregation. She was there for the first time in a few weeks because she had just had surgery and gone through some tests that could have revealed some very bad news. The tests had come back fine, and she was glad to be back in the worship service. So I went over while we were all singing and gave her a hug.

Two hugs, given for different reasons, but both serving the same purpose—to build up the body of Christ.

This entry was posted in Christian Living, Church, Leadership and tagged Christian love, comfort those who mourn, hugging in church, hugs, illustration, rejoice with those who rejoice, Romans 12:15. Bookmark the permalink.