Running for the Cross 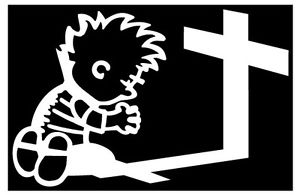 Rachel Allord tells about the time that her church had a special worship service that focused on the cross. They had a large cross at the front of the worship area, and they invited worshipers to fasten a black ribbon to the cross, signifying that Jesus had died to take their sins away.

Rachel was trying to explain the meaning of this to her three-year-old son, but she wasn’t sure how much was sinking in.

After they had attached their ribbons and returned to their seats, her son said, “Mama, I want to see the cross again.”

She writes: “Usually my son wouldn’t stray more than a few feet from my side, so I helped him out of his seat, expecting him to stand near the aisle and gaze from afar. But when his feet hit the floor he ran up the center aisle, his eyes fixed on the cross. As I watched him gaze up at the blackened cross in wonder, my initial embarrassment vanished. He had done what I pray he’ll do for the rest of his life—run unashamedly to the cross.”

“For the message of the cross is foolishness to those who are perishing, but to us who are being saved it is the power of God.”—1 Corinthians 1:18.

This entry was posted in Christian Living, Communion Meditations and tagged 1 Corinthians 1:18, cross, cross is the power of God, illustration, Jesus died for our sins, kids in church, kneel at the cross, little boy at the cross. Bookmark the permalink.