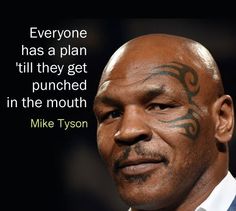 Guitarist Charlie Hunter has a new album out called “Everybody Has a Plan Until They Get Punched in the Mouth”. The title–which I think is quite humorous–comes from a quote from boxer Mike Tyson, a man who changed the plans of a lot of people over the course of his career.

Sometimes you think that you have it all planned out, and then life punches you in the kisser. You think you’ve finally achieved some financial stability, then you unexpectedly lose your job. You believe you have found the love of your life, but that person suddenly decides otherwise. A friend of mine planned to travel with his wife when they retired, but her health issues kept them close to home.

When life punches you in the mouth, the only thing to do is get up, shake it off and move on.

Paul the apostle was really popular with the crowd in Lystra until some outsiders came and turned the people against him. Then “…They stoned Paul and dragged him outside the city, thinking he was dead. But after the disciples had gathered around him, he got up and went back into the city…” (Acts 14:19-20).

Like I said, when life punches you in the mouth, the only thing to do is get up, shake it off and move on.

This entry was posted in Christian Living, Humor, Leadership, Sports and tagged Charlie Hunter, everybody has a plan, illustration, Mike Tyson, perseverance, punched in the mouth. Bookmark the permalink.