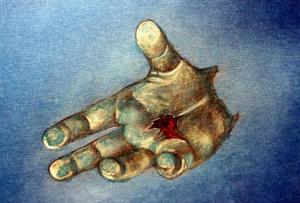 Every time I read about the doubts of the apostle Thomas in the twentieth chapter of John’s gospel I am reminded of the fact that people named “Thomas” seem to get a raw deal. Think about it. Remember the nursery rhyme about Tom, Tom the piper’s son? You know what he did. He stole a pig and away he run. And what do you call someone who is caught sneaking a peek into your window after dark? Peeping George? Peeping Fred? No! He’s a peeping Tom. Then there’s doubting Thomas. It’s like everyone named Thomas is a pig-stealing pervert who doesn’t believe that Jesus rose from the dead!

But he did raise from the dead. The eyewitness reports and the testimony of Scripture are proof enough to the honest seeker of the truth.

What Jesus said to Thomas he would say to anyone—“…Stop doubting and believe.”—John 20:27.