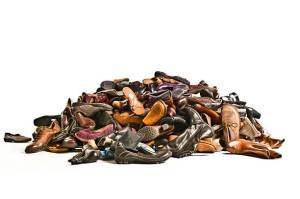 Shane Claiborne, an advocate for the poor and homeless, once spoke at a church service in Chicago. And at the end of his speech he said, “When I’m done here tonight, I’m going to go be with some homeless folks in Chicago, and a lot of them don’t have shoes. And they need shoes. So I’m just asking anybody who’s willing, take your shoes off, bring them up here, and I’ll take them into the city.”

There ended up being 1,500 pairs of shoes left after the service, and people went home in their socks.

That’s a radical act of giving!

“Give, and it will be given to you. A good measure, pressed down, shaken together and running over, will be poured into your lap. For with the measure you use, it will be measured to you.”—Luke 6:38

This entry was posted in Christian Living and tagged generosity, giving, helping the poor, illustration, Luke 6:38, offering meditation, Shane Claiborne, stewardship, the measure you use. Bookmark the permalink.